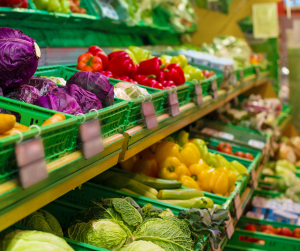 To the average American there are few things as common as a grocery store. Although they have only existed in their current form for roughly a hundred years, people often consider them to be as ubiquitous as the items the stores carry. As most people walk the aisles of a modern supermarket collecting their goods, they likely consider the task rather pedestrian and suburban while few recognizing that one is standing in a true apex of modern value-added production and logistics.

Your typical supermarket carries around 40,000 distinct consumer goods. So, where does all of that come from? A tiny fraction of it is prepared at deli counters or bakeries but their constituent components are not. Nothing is designed, refined, or produced there from conception to inception. Every product available -despite how artisan, home-grown or small batch it claims to be- is the end result of a scaled industrial process. Modern manufacturing techniques are applied to the production of these goods or there simply could never be enough of them to fill every supermarket shelf.

While the production, packaging, and transportation of finished consumer goods to the tens of thousands of grocery stores around the nation is impressive, these efforts are just the tip of the iceberg of a much larger manufacturing effort: food ingredient production. If you reach into your cupboard and pull out any finished food item, you will find a legally mandated ingredients list somewhere on the packaging. Starting from the top of this ingredient list, you will likely have some idea of what you are looking at with items such as corn, wheat flour, cane sugar, soy, etc. However, as you move down the list things may become a bit unclear. Riboflavin? Dextrose? Potassium bitartrate!? What are these things? Where do they come from? Who makes them? Are they safe? The short answer is the vast majority of these are naturally derived organic and inorganic compounds that are perfectly safe for and quite likely necessary for the human metabolism. Riboflavin is Vitamin B2; Dextrose is just sugar; and Potassium bitartrate you likely know by its user-friendly name, Cream of Tartar.

So, why the confusion? These food ingredients and additives are precise chemical compounds that are refined and produced to exacting standards and purity by food scientists for other food scientists. There are over 20 million identified organic substances on Earth and many of them are toxic so legally there cannot be any ambiguity in what is being utilized in food production; proper chemical names must be used. Companies like ADM and Tate & Lyle who discover, develop, and produce these substances along with hundreds of millions of tons of more common food ingredients are at the cutting edge of organic chemistry and bioscience and are doing this work right here in Decatur, Illinois. It is however unlikely that you will ever spot their logos in your shopping cart, but believe me, their products are likely there.